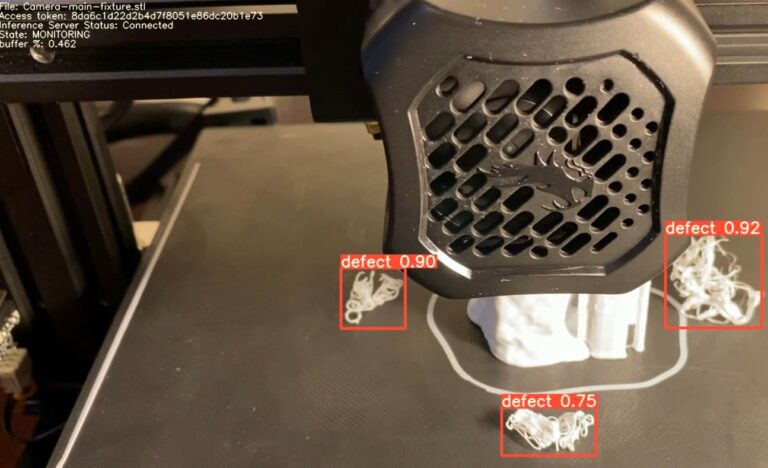 Kicking things off with real-time defect detection, this article is the first in a series focusing on artificial intelligence (AI) and 3D printing, as the technology continues to be field tested in increasingly demanding applications to improve part quality, automate the manufacturing process and even operate machines autonomously.

In the recent 3D Printing Industry survey titled Future of 3D printing: experts on the frontier technology to watch, AI and machine learning (ML) were mentioned by a quarter of respondents, making them the technologies whose we talk the most. Some respondents hailed them as “defining the frontier”, while others saw them as a basis for “autonomous robots”, but elsewhere companies like Printpal use them here and now.

“We have an anomaly detection system that works in the background, and this system can ‘detect’ when something very slight has changed with the printer or if there is an anomaly,” explains Peter Lebiedzinski, CEO of Printpal.

“That’s equivalent to having an intern constantly watching the print for the duration of the print without having to pay them $15 an hour,” he added. “It has very obvious advantages: saving time and material, and giving the user peace of mind in avoiding damage or fires.”

Of course, anyone who’s ever come back to find a failed build will know the frustration that comes with it, but it’s not just the printing defects that are limiting the wider industrial adoption of 3D printing, it’s also a part of consistency. According to a recent study by the manufacturing service provider Jabil37% of users cite quality flaws as an issue that prevents scalability, while 39% blame technology limitations.

In order to help users improve the consistency of their parts and overcome frustrating failures, a number of companies like Printpal, as well as other researchers and institutes are currently working on algorithms that can alert users to errors. in real time. To find out how these AI-based software packages work and where they could be applied in the future, 3D Printing Industry spoke with industry experts.

When it comes to manufacturing on an industrial scale via technologies such as laser powder bed fusion (LPBF), it is essential to understand how each step in the process affects the quality of the parts produced. In particular, the porosity of metal components can be a problem.

To fully understand what causes such porosity, Argonne National Research Laboratory Noah Paulson and his team have developed a method of using ML to predict defects. Indeed, the team succeeded in using thermal imaging to identify the temperature history of different printed parts, before feeding this data into ML algorithms capable of predicting the risks of subsurface porosity in future constructions. .

“In-situ ML porosity prediction can predict the likelihood of defects forming when printing each component,” says Paulson. “This provides an indication of when it is likely to be compromised and should therefore be reserved for further destructive or non-destructive evaluation. As these techniques are more time consuming and expensive, their use could be minimized using ML. »

“Once formed, ML can predict the likelihood of subsurface porosity for a new time-temperature history measurement.”

Elsewhere, at another of the leading research institutes in the United States, Oak Ridge National Laboratory (ORNL), scientists are also developing a digital framework for the certification and qualification of printed parts. It is in pursuit of this goal that the team created “Peregrine”, an algorithm designed to automatically detect anomalies in the texture characteristics of each object layer, via digital imagery.

Thanks to its robust neural network architecture, the software is said to be able to reliably detect and identify the causes of several different classes of faults. Specifically, Peregrine discovers how certain morphological texture features correspond to anomalies, before using that data to create a model that can be deployed to inform future impressions.

“By repeating the process over the entire height of the printed volume, it is possible to create a 3D model of the component which can then be compared to the original design to produce a 3D map of all the pores”, explains Vincent Paquit, of the group of the ‘ORNL. leader in the analysis of energy systems. “Traditionally, this assessment is done using X-ray CT imaging, a process that requires completion of the manufacturing process.”

“Peregrine’s in-situ data analysis provides the same feedback, but in real time, allowing users to stop the process in the event of early detection of a catastrophic failure,” he added. “Although in situ monitoring should not be considered a substitute for CT X-ray imaging, it does provide a complementary solution for statistical sampling.”

While AI 3D printing algorithms generally remain at a relatively early stage of development, researchers have begun experimenting with their first applications. At the end of last year, for example, a joint team of Penn State University and the US Air Force Research Laboratory (AFRL) used ML to generate a single model which identifies defects during construction and deployed it on 3D printing antenna parts.

“Our approach is a variant of online simulation, but ML substitution prediction is very fast,” says Dr. Philip Buskohl, AFRL Mechanical Research Engineer on the project. “This requires paying the simulation costs up front to create the training set, but opens the door to real-time prediction and later fault repair.”

Two years ago, from Western University Aliaksei Petsiuk has also started working with well-known 3D printing innovator Joshua Pearce to develop an open source error detection algorithm. Speaking to the 3D printing industry, Pearce has now revealed that he continues to develop the technology with colleagues, as he says products like Spaghetti Detective tend to uncover big failures, but “miss more subtle issues”.

“More recently, we’ve had great results creating synthetic images with Blender,” says Pearce. “We detect 3D printing anomalies by comparing images of printed layers from a stationary camera, with G-code-based reference images of an ideal process. This open source method allows the program to notice critical errors in the early stages of their appearance and suspend manufacturing.

However, while Buskohl and Pearce’s projects reflect the potential of artificial intelligence technologies to advance open-source 3D printing and defense manufacturing, research conducted at NYU Tandon discovered some of its potential pitfalls.

Leveraging machine learning, engineers at the university reported reverse engineering 3D printed components made of fiberglass and carbon. Although the team behind the project initially designed their software to design complex parts and estimate their properties, they discovered that by “reversing the flow of information” it is possible to reconstruct a replica without the consent of designers.

According to Nikhil Gupta, a NYU Tandon professor and member of the team behind the paper, this doesn’t necessarily mean that reverse engineering is happening, but he hopes his findings will “at least alert the community of design” on this possibility.

The future of AI in real-time monitoring

Whether investigating the pros or cons of deploying AI in 3D printing, it is clear that a significant amount of research is being devoted to exploring its full potential. Although many of these algorithm-based approaches in development are still years away from end use, the likes of Sigma Laboratories have already successfully marketed theirs.

At present, the company’s revenues remain relatively low, but it continues to foster close ties with government contractors. In fact, Sigma Lab PrintRite3D Real-time surveillance software was even selected by Lockheed Martin to support its space division in March last year. Yet while the platform is currently made up of hardware and software modules, Sigma Labs has now unveiled plans to launch a software-only offering, predicting it could be adopted by up to 10% of 3D printer users. metal.

So what does this mean for AI in the 3D printing industry? According to Lebiedzinski, recent advances in technology suggest that software packages such as his company’s PrintRite3D and PrintWatch will unlock greater automation in the industry. According to the CEO of Printpal, this could prove particularly beneficial for 3D printing service bureaus, as it allows them to perform preventative maintenance that minimizes machine downtime and prioritize orders accordingly. optimal delivery of parts.

“The end goal of AI software is to run continuously without any human interaction,” concludes Lebiedzinski. “The software automatically selects print jobs, prints them, scans them from the bed into a reservoir and repeats the process. Machine learning will be essential for this system to work properly and efficiently. »

The featured image shows a diagram illustrating what the AI ​​model of Printpal’s PrintWatch software sees. Image via Printpal.