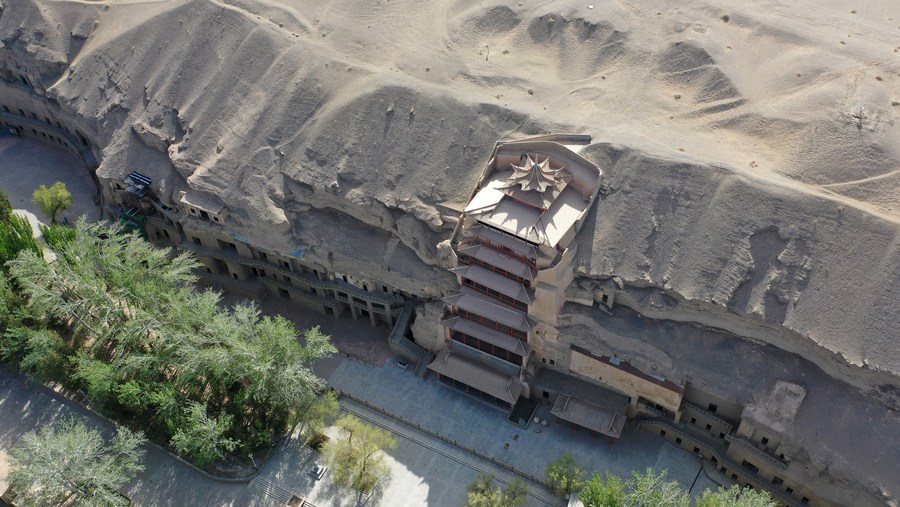 LANZHOU, May 26 (Xinhua) — An exhibition featuring models of the architecture painted on the murals of the Mogao Grottoes has opened in Dunhuang City, northwest China’s Gansu Province.

A total of 419 objects, including paper cave models, 3D-printed architectural models and digital renderings of Mogao Cave murals, are on display after seven years of planning, according to Dunhuang Academy.

The academy transformed the pavilions, terraces and towers depicted in 26 murals into architectural models, said Fu Hualin, a researcher at the academy. This is the first time the academy has brought to life the architecture depicted in the large-scale murals.

The largest exhibit is a Buddhist temple complex from the Tang Dynasty (618-907). With a diameter of 4 meters, the model took researchers a year to build.

“These models are not only similar to the architecture of murals, but also have good stability,” Fu said.

Academy researchers began studying the architecture depicted in the murals in the 1940s, providing academic support for the exhibit, according to Fu.

Admission to the permanent exhibit will be free to the public, the academy said.

The Mogao Grottoes are a UNESCO World Heritage Site and house an extensive collection of Buddhist artwork – over 2,000 colorful sculptures and 45,000 square meters of murals. ■