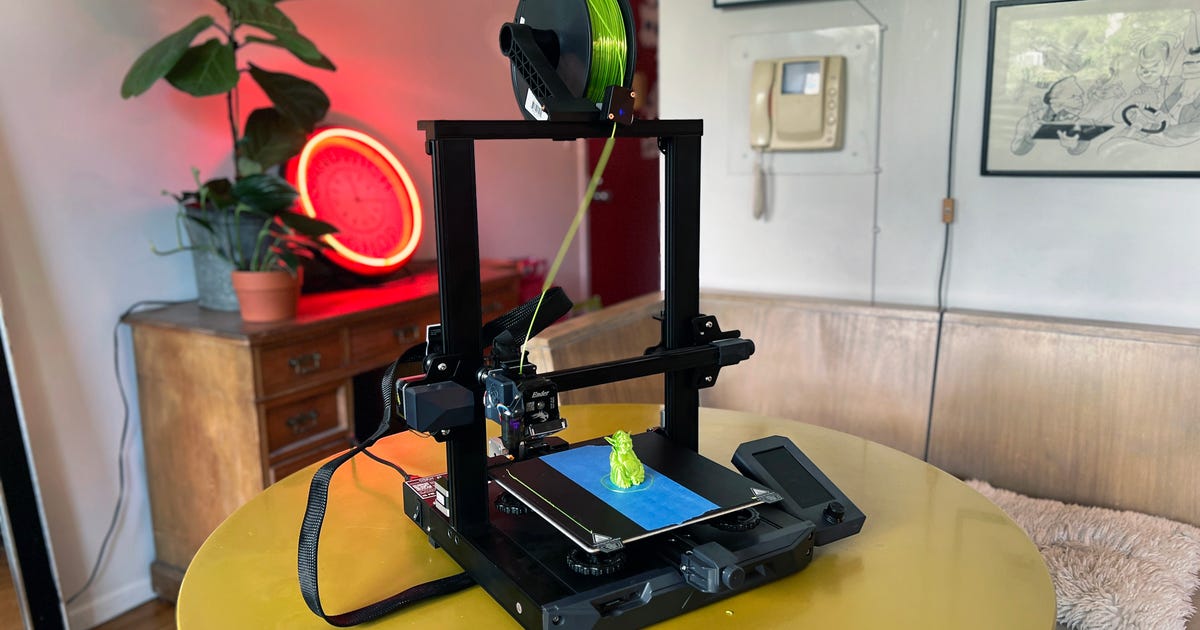 The Creality Ender-3 S1 had been sitting in a box near my desk for a while before I dared to install it. I had been reluctant, having heard stories of the popular Ender-3 line requiring a huge investment of time and effort to assemble.

For example, the consumer Ender-3 V2 is considered a great 3D printer for under $300, but not necessarily for beginners. This requires a lot of manual assembly, from building the frame to attaching the individual motors and sensors. Even after that, most Ender enthusiasts strongly suggest replacing some of the default hardware with aftermarket upgrades, which adds additional complexity.

At $399, the S1 version of the Ender-3 costs about $100 more than older versions, but includes so many upgrades and quality of life features that it’s considered a great plug-in printer. and-play friendly for beginners. Most.

Upon opening the box, I was pleasantly surprised to find the entire gantry pre-assembled (i.e. the two side support pieces and one top). The base is mostly pre-assembled and pre-wired; assembly took maybe 15 minutes, compared to the few hours I had heard of for previous models.

The 220mm x 220mm x 270mm print size isn’t huge, but it should be big enough for many hobbyists. The nozzle temperature can go up to 260 degrees Celsius (500 degrees Fahrenheit), which is not the highest, but again, good enough for standard PLA/ABS/PETG/TPU printing. These initials all refer to different types of 3D filament, which are described in more detail here in our guide to 3D printing filaments: If you’re just starting out, basic PLA is what you’ll likely use. It is inexpensive, non-toxic and easy to work with.

One of the key advanced features is that the system works with a direct-drive extruder, rather than a Bowden tube. This means that the filament you use goes straight into the extruder and straight into the nozzle. In a Bowden system, the filament passes through an extruder, which then forces it through a thin plastic tube to the nozzle. Both are good, but the direct version removes the extra parts and potential signal chain complications and is considered more reliable. A good analogy is a direct drive turntable versus a belt drive.

There’s also a little sensor box that the filament runs through that tells the system when you’re low on material, which is a plus.

Another feature you don’t always find in budget 3D printers (and previous Ender-3 models) is auto-leveling. The system will perform a routine on its own to probe and adjust so that the print bed is completely level. Similarly, previous models usually included a simple bed of glass to print on, the S1 version has a flexible sheet of metal that magnetically attaches to the base. This is my preference, as it makes removing prints from the bed much easier.

The Ender-3 S1 includes many features that I would consider premium, but it also lacks a few that I wish I had. The color display is not a touchscreen, but is instead operated by a single button used to scroll through menus. It’s a pain that seems unnecessarily archaic.

There’s also no Wi-Fi, which for a minute seemed like it was becoming a standard feature in 3D printers (as it should be). Instead, you must transfer files via an SD card (one is included) or a direct USB connection. There are ways to hook up a simple, separate Raspberry Pi minicomputer and use it to log in, but it’s far from simple.

Make sure you have a spool of filament handy when you start, the box only includes a small sample loop, not even on a plastic pin.

The S1 in action

After the printer was set up and upgraded, I tried one of the test files included on the SD card. It went fine, but when I loaded new files onto the card and tried to print them, I ran into issues. I felt like the nozzle wasn’t getting close enough to the plate for the filament to stick, no matter how much I adjusted the Z axis in the system menu.

I was using the basic version of Cura, the popular free 3D slicing program (slicers are used to prepare 3D models for printing), and the default settings were clearly not fine tuned for Ender -3 S1. Creality offers a customized version of this software, renamed Creality Slicer, and using it solved the problem immediately. I still plan to go back and adjust the usual Cura settings as well.

I tried a few different 3D models, some sculptural and some more structural. As I burned through a spool of green PLA material, my choices tended to lean towards the Yoda/Hulk side of things. Print quality, even out of the box, was excellent, although that largely comes down to having good models to work from. I’d say it’s as good as the print quality of $500-600 printers I’ve tried.

The Ender line has always been known for its good value and excellent performance in a budget printer, but it has also been criticized for not being beginner-friendly enough. That’s why I generally recommend printers like the Vyper Anycubic for beginners, which is both inexpensive and easy to set up.

With the Ender-3 S1, Creality has a high-quality, low-cost 3D printer that’s as easy to set up as any I’ve tried. There’s also an S1 Pro model (for another $100-$150) that upgrades the machine’s hot end assembly to an all-metal assembly that supports higher temperatures, adds a light strip LED on the top, improves the flexible surface bed and adds a touch screen. You can find a full list of differences here.

In the $300-$500 range, I still like easy-to-use printers like the Anycubic Vyper or Prusa Mini Plus, but the Ender-3 S1 just moved to the top of my list of recommendations.