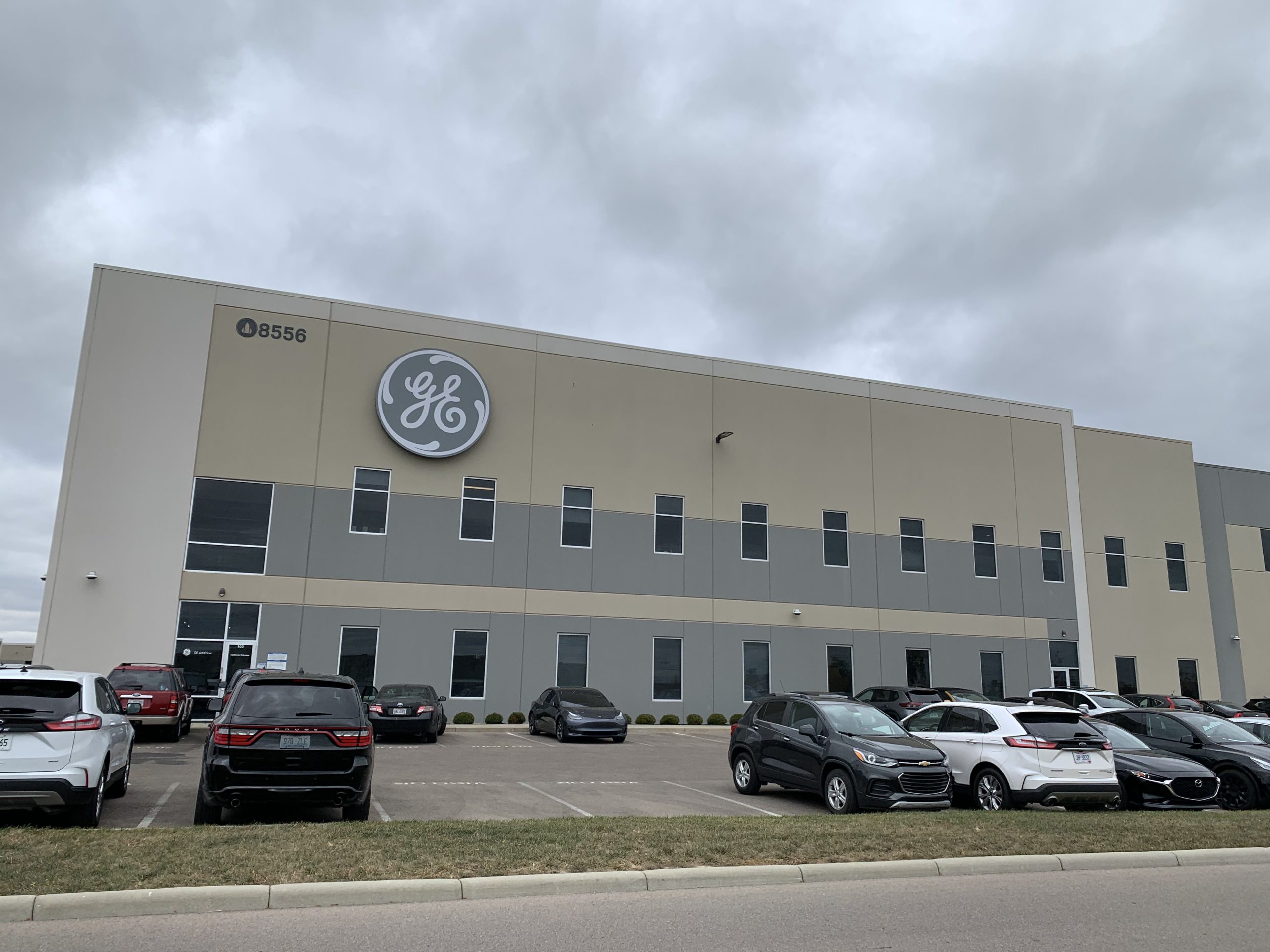 Applications for the 2022 3D Printing Industry Awards are now open. Who do you think should be on the shortlist for this year’s show? Let us know by voting now.

GE aviation-focused manufacturing companies GE Aerospace and GE Additive shared their vision for the future of industrial 3D printing via a tour of their facilities in the United States.

Over the past decade, GE has steadily expanded its 3D printing capabilities, buying Morris Technologies, Arcam and Concept Laser along the way. Using the technologies it has acquired, the company has succeeded in developing breakthrough end-use parts for its own GE90, GE9X and Catalyst engines, as well as the LEAP engine of CFM Internationala joint venture it created with Safran Aircraft Engines.

Perhaps the best known of these is GE’s legendary 3D printed fuel nozzle tip. The component, which became something of a poster child for aerospace 3D printing when it was unveiled, is designed to be 25% lighter and 15% more fuel efficient than CFM56 alternatives. Since the part was first developed, GE has manufactured it more than 140,000 times, an unprecedented feat in the aerospace 3D printing industry.

However, GE may be one of the biggest companies operating in the 3D printing space, but they rarely release detailed updates on the progress of their business there. This conservative approach to reporting leaves open a number of questions about the potential of its technologies to address industrial applications that are often heralded as the future of additive manufacturing.

So what game-changing innovation is GE cooking up next? Luckily, the company invited 3D Printing Industry from a select few media outlets to two of its factories in Cincinatti, Ohio to find out. While photography inside the company’s development sites was strictly prohibited, attendees were allowed to report what they found, including the following breakdown of its latest R&D initiatives.

The first stop on GE’s tour was a tour of its Additive Technology Center (ATC), a colossal R&D center dedicated to developing 3D-printed aerospace parts for production at its manufacturing facility in Auburn. The trip was led in part by ATC Site Manager Chris Philp, who explained how the work done at the GE Aerospace-managed complex helps inform the development of machines built at GE Additive.

“We have open conversations with them, but it’s important that everyone gets that feedback. GE Additive has been very open to that,” Philp said before the tour. “A lot of our feedback helped develop the [Concept Laser] M2 series machines.

After a detailed safety briefing, journalists were then taken into the factory to see GE’s cutting-edge additive manufacturing technologies for themselves. Once there, Philp showed how the company went from a sensor box developed in 2015, its first FAA-certified 3D-printed part, to the more structural components of its Catalyst engine.

The first, Philp explained, protects the GE90 sensors from icing damage, but if it were to fail, he admitted the part would just need to be replaced and would not compromise the engine. Since then, the old GKN The engineer said GE had “leveraged its success with the GE90” to develop parts such as cyclonic inductors and dust separators for the GE9X, the “world’s most powerful commercial aircraft jet engine”. .

As the name suggests, the latter prevents large dust particles from penetrating and damaging the core of the GE9X’s thrust-generating motor. Installed all around the engine, these devices have complex internal geometries that effectively keep particles away. In doing so, Philp added, they were “improving availability and reducing maintenance” of a turbofan engine intended to power Boeing’s 777X jetliner.

Along with the catalyst, Philp showed how GE has moved to flight-critical parts like planetary gearboxes (PGBs), adding that “if that fails, we have a much bigger problem.” The ATC site manager also explained that 3D printing is enabling a huge amount of part consolidation in the engine, with around 35% of its 855 total parts now printed in just 12.

In more recent innovations, ATC was revealed to have expanded its pool of metals from three to six, including cobalt chrome and nickel alloy 718, alongside two aluminums and two titaniums. Later in the tour, Philp later hinted at some of the development work that GE Aerospace is doing for the The American army with its GE T901 engine, one of the two being intended to replace the United States Air Force (USAF) GE T700.

At the end of the ATC tour, GE provided an update on its other USAF project, the XA100 adaptive cycle engine being built to enable multimodal fighter jet flight, but that was the Perhaps the most telling of his plans were the final remarks of GE Aerospace’s General Manager AM Benito Trevino and Chief Additive Manufacturing Engineer Brian Talbert.

Trevino explained how GE sees “greater military opportunities driven by accelerating demand for heat exchangers,” but with “less desirable wide bay engines” they are unlikely to achieve the same throughput as its end cap. fuel nozzle. Instead, the 24-year GE veteran suggested that “parts consolidation is the real value proposition of the add-on” because it allows users to reduce their lead times and dependence on suppliers.

Talbert, meanwhile, shed light on what GE Aerospace considers “industrialization,” a term that has cropped up repeatedly throughout. The engineer, who worked on GE’s Catalyst, hinted that it meant the process of bringing parts to life from the drawing board. This, he said, involves analyzing the “quality-defining physical characteristics” of a part to ensure they are safe, functional and cost-effective for end use.

Just four miles away, the second stop on GE’s 3D printing tour took attendees to a new GE Additive facility. Never shown to outside media before, the complex was opened to accommodate the growth of GE Additive, which had originally been housed in ATC but moved to another plant in June 2020 to facilitate its machine testing activities, which include binder jetting development. systems.

Rather than acquire a developer of such technology, as it did with Arcam and Concept Laser, GE launched its own R&D program in 2016. Over the next two years, the company built the versions H1 Alpha and H2 Beta of an exclusive binder jetting machine, the performance of which he continues to work on optimizing with partners such as Cummins, Wabtec and sandvik.

At the GE Additive plant in Cincinnati, Brian Birkmeyer, its Binder Jet product line manager, led a factory tour alongside its Chief Innovation Officer and fuel nozzle tip developer, Joshua Mook. . Like at ATC, the sensitive R&D conducted there was hidden behind multiple layers of security, including large doors to obscure the machinery from outside view, but once inside, the GE team was happy to to share.

In the workshop, engineers were hard at work developing the latest version of GE Additive’s binder jetting machine: the 3-Series, in addition to its range of ancillary Binder Jet products. Designed for deployment in mass production environments, the system 3D prints by depositing a water-based binder onto a powder bed, before its water content evaporates, leaving behind a reticulated “green part”.

To prove just how strong these prints are, the team challenged guests to try breaking test pieces, and they proved to be extremely resistant to breakage. The system also does not accomplish this at the expense of precision and would be capable of producing components with wall thicknesses less than 500 µm. Thanks to its interchangeable input conveyor and the configuration of its pre and post-processing machines, it is also possible to chain 3 series to create a production line.

By doing so, Mook said users can achieve “cascading powder delivery” in a way that generates a “100% utilization rate” and truly unlocks “non-disruptive manufacturing.” In terms of applications, Mook and Birkmeyer said the system was first developed because there was no binder jetting solution to meet GE’s casting manufacturing needs, but they also pointed to the automotive as a demanding potential use case.

Asked how their company views competitors, the pair wouldn’t be attracted to issues like HP’s recent launch of Metal Jet or Nikon’s takeover of SLM Solutions. That said, they’ve been very upfront about the limitations of binder jetting around parts with complex internals, with Mook saying users “won’t be able to build a fuel nozzle” with it. On the broader issue of market rivals, he added that GE is “a bit unique” in targeting industrial binder jetting, so it “plays its own game.”

While you’re here, why not subscribe to our Youtube channel? with discussions, debriefs, video shorts and webinar replays.