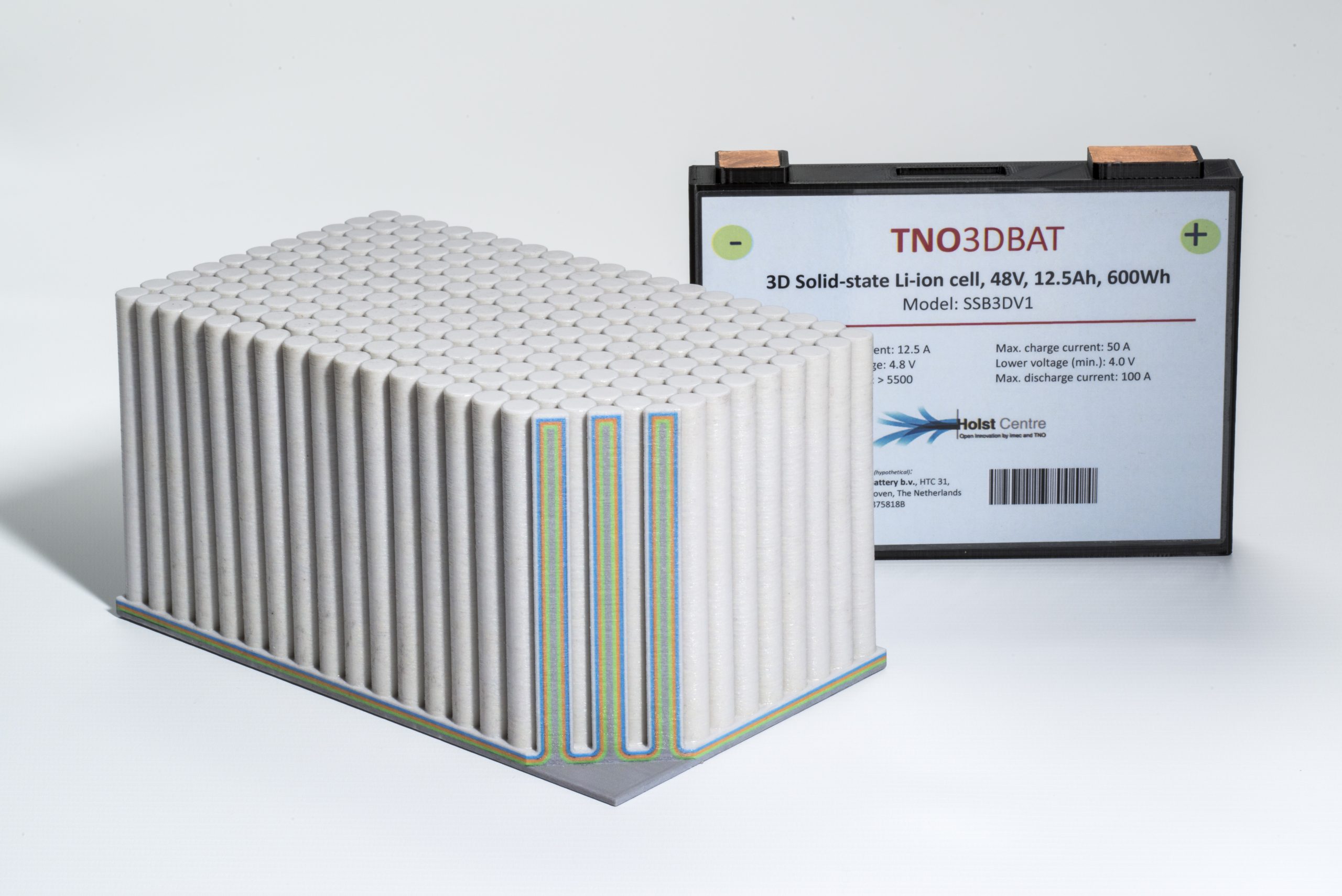 By: Dorothy T. Andrews
In: 3d technology
With: 0 Comments

Batteries for energy storage, for example in electric cars, are becoming increasingly important. LionVolt BV, a spin-off of Netherlands Organization for Applied Scientific Research (TNO), promises to build a 3D solid-state thin-film battery that is lighter, safer and more efficient than current lithium batteries. The ‘Proof of concept‘has already been delivered. They are now waiting for investors to build the first pilot plant. Will this innovation from the Dutch province of Brabant conquer the European market?

The demand for batteries is increasing. They can be used, among other things, to store sustainably produced energy in electric cars. LionVolt BV, a Brabant TNO Holst Center spin-off, offers a very promising technology for future batteries. This innovative technology is not entirely new as it builds on an earlier concept developed by Philips Research. At the base of these batteries are 3D technology and various layers of solid materials, called â€œsolid stateâ€. This 3D structure is created using billions of rods covered with thin layers of functional material.

What is promising is the combination of a 3D structure, a thin film and a solid electrolyte that allows the conduction of electric current. â€œThe 3D structure offers a large area as well as small distances between the electrodes,â€ explains Ton van Mol, Managing Director of TNO at the Holst Center in Eindhoven, the Netherlands.

Your Weekly Innovation Snapshot Every Sunday, the best articles of the week are delivered to your inbox.

â€œBecause lithium ions only have to travel a short distance, this leads to very fast charge and discharge rates. As a result, the battery can be charged in 10 minutes. In addition, it achieves an energy density two to three times greater than that of existing batteries. This means that the batteries need to be recharged less often. This makes them more efficient than traditional batteries. In practice, this means that cars with such a battery on board would be able to cover a distance three times greater than it currently is.

In turn, the thin film allows more flexibility and lighter weight. The flexibility of the material lends itself to applications in all kinds of garments and garments, while its light weight makes it particularly well suited for vehicles, such as cars.

Finally, compared to â€œwetâ€ batteries, which contain a liquid electrolyte, â€œsolid stateâ€ materials make them much safer. On the one hand, they cannot flee. They are also not likely to explode or catch fire. This is the case with batteries which are currently often used in, for example, laptops and smartphones.

From proof of concept to pilot plant

New production technologies – which have yet to be expanded – are used to produce the batteries. Van Mol is optimistic, however: “With the production ‘spatial atomic layer depositionhe technology developed by TNO and its partners (a technology that has already been marketed by TNO for solar cells) allows us to rapidly build large surfaces atomic layer by atomic layer. We now want to enter the market with this combination.

For six years, the Holst Center has been working on an evolutionary model. This resulted in the creation of LionVolt BV last March. A proof of concept was carried out in December. Van Mol: â€œLionVolt technology can already be used in all kinds of wearables. Such as wearable health patches that you can attach to your arm for remote patient monitoring.

But now is the time to invest in setting up the first pilot plant. Then it’s all about scaling up, according to Van Mol. â€œFor disruptive technology like this, you have to stay engaged for a long time. And besides a lot of money, it also takes a lot of patience. It will take at least four to five years to set up the first pilot plant. This is why LionVolt will focus on smaller volumes first. Then we will have to develop production step by step, one plant at a time. “

Van Mol’s ultimate goal is â€œa whole new architectureâ€ for batteries. â€œThis type of battery can be used for anything. It could in fact offer a European alternative to the current batteries, which for the moment are still all originating in Asia. But in this regard, Van Mol believes that this disadvantage also has its advantages. â€œThe conversion of existing factories is very complicated and generally not very profitable. So that you can immediately set up a factory with the right facilities for this new technology.

The good news is also that the battery market is huge. And Van Mol predicts that the end is far from being seen. â€œEurope still has only a few of its own battery factories and a few more under construction. Meanwhile, automakers are lining up for them. For example, Volkswagen recently said it would target 70% electric cars within five years. While all kinds of other automakers, from Volvo to BMW, are also working on making their cars electric. “

And what about the future prospects for planes and ships, where weight is also an important factor? Van Mol does not yet dare to think that far, although he is very confident about the prospects for the future. â€œWith a battery from our own country, not only the Netherlands, but also Europe, will be able to become less dependent on Asian players. How wonderful would that be ?! A factory, right here in North Brabant, which will also provide employment for thousands of people!

Learn more about solid-state battery technologies at this link.