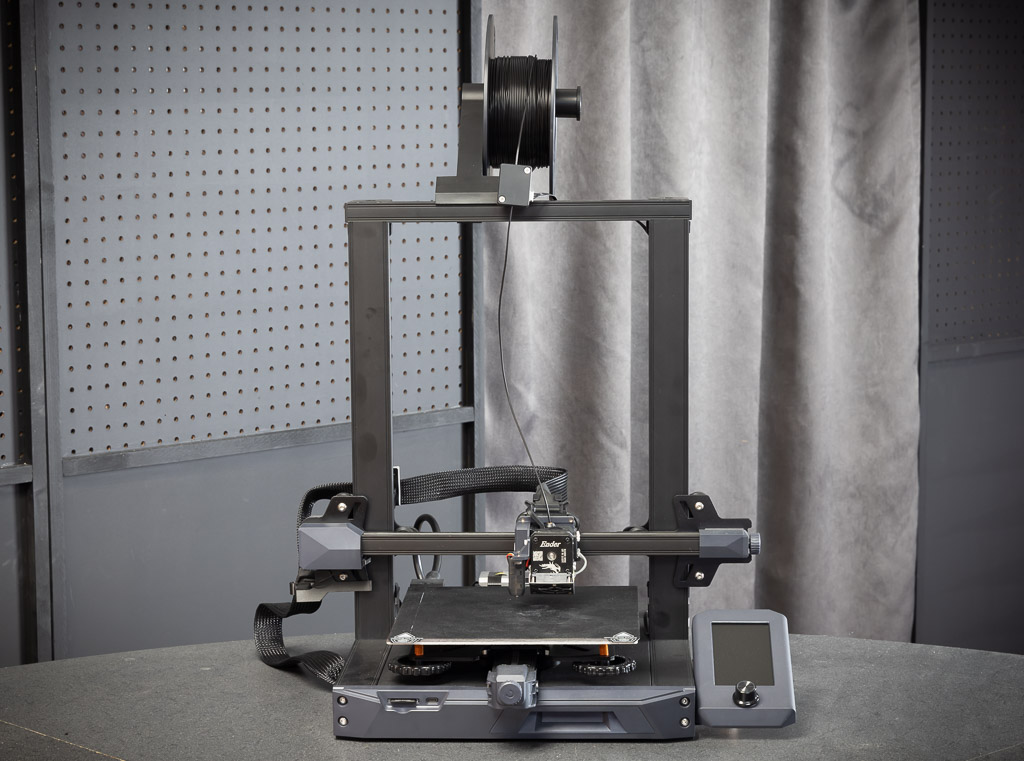 REVIEW – When Creality offered to send me its Ender-3 S1 3D printer, I had a big dilemma. I wasn’t impressed with their CR-Lizard 3D scanner software, but their printers seemed pretty popular. Of course, I went for the review, but read on to see if it was a good choice.

The Creality Ender-3 S1 is a Fused Deposition Modeling (FDM) 3D printer with auto-leveling and a direct-drive extruder.

Assembling the Creality Ender-3 S1 3D printer was extremely easy. It consisted of four screws in the nozzle assembly, four in the gantry, and three for the display mounting bracket, appearing on the filament spool bracket and plugging in a few connectors. It will take you longer to read the instructions to know which screws go where than to assemble. Don’t forget to switch the power supply to 115v or 230v depending on your main power supply.

Initially, I was apprehensive about the 4.3-inch LCD’s lack of touchscreen capability. However, after using the command button for a little while, I found it wasn’t as bad as I thought. Button control was actually faster for some tasks than a touchscreen.

The machine turns on and starts quickly, taking only about 6 seconds. Three clicks of the button to the right and a press of the button start the upgrade procedure. Automatic calibration of 16 points on the bed surface takes about three minutes. Automatic bed leveling compensates for variations in the bed as the print head moves across the bed surface. If there is a low or high point, the printer will compensate for that.

This is where I found one of the things that I think could be improved with the Creality Ender-3 S1 3D printer. The CR touch sensor and cooling fan are located on the front of the nozzle assembly. It’s hard to see the nozzle when you’re sitting on a standard desk unless you’re looking sideways at about a 45 degree angle. Definitely not a deal-breaker, just something that could be improved.

Filament loading is not covered very well in the manual. The manual says “Heat the nozzle above 185°C”, but it doesn’t tell you how to do this. There are two ways to do this. The first method is to select Prepare->Preheat PLA. The second method is to use Control->Temperature->Nozzle Temperature. The Nozzle Temperature section also contains the settings for the PLA Preheat/ABS Preheat Presets mentioned in the first method.

When loading filament, I was unaware that the lever next to the extruder filament hole had to release the pressure on the drive gears so that the filament could be manually pushed into the extruder. The manual doesn’t cover that either. My other printers use a different method for this lever. I thought maybe the lever was a tab that could be used to manipulate the extruder when it was hot. I finally figured out that pressing this lever to the left made loading filament really easy.

The rest of the manual tells you how to download the Creality Slicer software, which is just a customized version of Ultimaker Cura.

I found that I really liked the overall design of the nozzle assembly. The ribbon cable connector and four screws make it very easy to remove for maintenance. If you want to make it even easier to remove, check out Proper Printing Simple Tool Changer.

The easily removable sprite extruder makes it easy to change the tool head for the optional high temperature (300C) all-metal extruder and possibly other accessories in the future. Or, if desired, you can have a second extruder with a different sized nozzle. The extruder assembly also includes two fans, one for hot end cooling and one for layer cooling.

Perhaps the biggest problem users have with 3D printing is bed adhesion. Before flexible build plates, it could be difficult to get prints to adhere to the build surface. Creality avoids this problem by including a magnetic PC spring build plate with the Creality Ender-3 S1 3D printer. No tape or glue is needed. My first impression was that the supplied filament stuck almost too well and was a bit difficult to remove at first. However, I found removing the print was easier if I removed the plate and let it cool first. I also found that my favorite filament, the 3D Fuel Pro PLA, was easier to remove. Some of the too sticky print may also be due to the sample filament that Creality provided with the printer.

Of course, you wonder how well it prints. I must say that with the exception of my very expensive Markforged Mark Two 3D printer, the Creality Ender-3 S1 produced better prints than my Kywoo3D printers. Z offset is also easier to set up than Kywoo3D printers. The S1 is also very quiet when printing.

One thing the Creality Ender-3 S1 lacks is WiFi connectivity. At this time, transferring files via SD card is just a hassle. If you only print one model once in a while, it’s not so bad. However, if you make changes to the prototype and reprint it, it quickly becomes outdated.

I was very impressed with the wiring of the heated bed. Typically, this is something that printer manufacturers don’t spend a lot of time designing, just running the wiring directly to the head pads. Creality has put together a very nice cable and connection point at the back of the bed, eliminating any worries of wiring breaking over time.

Creality also includes a Z-axis limit switch for use with hot ends that do not have a BL/CR touch module.

Overall, the Creality Ender-3 S1 is a great 3D printer. This would be perfect for someone who is a beginner. It’s easy to upgrade and the prints are really great. Some of the small details really impressed me and gave me a whole new view of Creality. Well done Creality, well done.

Price: $399.00
Or buy: Creality
Source: The sample of this product was provided by Creality.