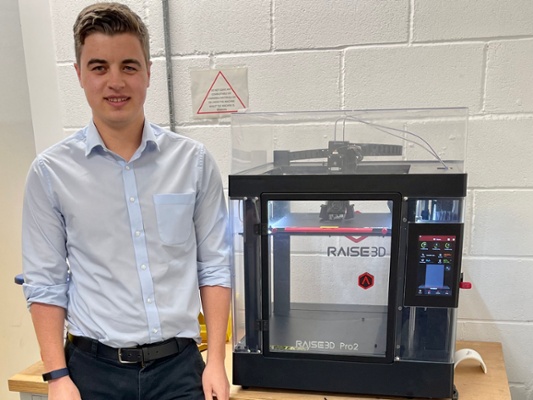 Cutting-edge technology, supported by the generosity of people, has made it possible to create personalized devices to give more autonomy to people with disabilities.

A collaboration between Swansea Bay Board of Health and Swansea University has led to the development of personalized items such as deodorant holders, hair curlers and nail polish.

And money raised through the health board’s charity helped fund some of the materials used to develop the aids.

Georgia Sinclair, who suffers from hemiplegia – paralysis on the left side of her body – has benefited from the project.

She says: “I struggled to try to be independent again, and Jonathan designed products to help me become more independent, like helping me with my hair.

“For me, the difficulty of being a disabled person is that you lack independence over things that you know are so simple, and this project has given that back to me. I have become much more independent and don’t need to ask people to do things for me. It brought me a lot. »

Another participant, Daniel Jones, has the use of one hand due to cerebral palsy.

He said: “This project had a huge impact on me.

“One of the things that was designed for me is a deodorant holder. Because I can’t use my right hand, I couldn’t get the deodorant under my left armpit but the holder allowed me to do it.

“It gave me so much more control, which helps me a lot.”

Swansea Bay Health Charity, the official charity of Swansea Bay University Health Board, has funded equipment to support the production of the devices.

Jonathan said: “I am doing a PhD at Swansea University and the funding we have received through the charity has allowed us to look at our research involving the end user in the design of their own assistive technology.

“The devices we design use advanced technologies such as 3D printing and computer-aided design, which allows us to customize the devices according to the user’s needs.”

Following the successes and positive feedback from participants, the project has been nominated for The Institute of Physics and Engineering in Medicine for Innovation in Health Sciences UK Advancing Healthcare Awards 2022, which takes place April 8.

Deborah Longman, Head of Fundraising at Swansea Bay Health Charity, said: “Innovative projects like this are exactly the kind of things that make me proud of the fundraising we do here at Swansea Bay.

“Being able to support these participants and make tangible improvements in their lives would not be possible without the kind and generous donations from our supporters.

“Jonathan is an exceptional scientist who is passionate about his work, and working together makes a real difference. We wish Jonathan every success at the awards ceremony.

Participants shared their benefits on a video, which can be found at this link.

Are you interested in raising funds to support NHS services in Swansea and Neath Port Talbot? Did you know Swansea Bay University Health Board has its own fundraising charity?