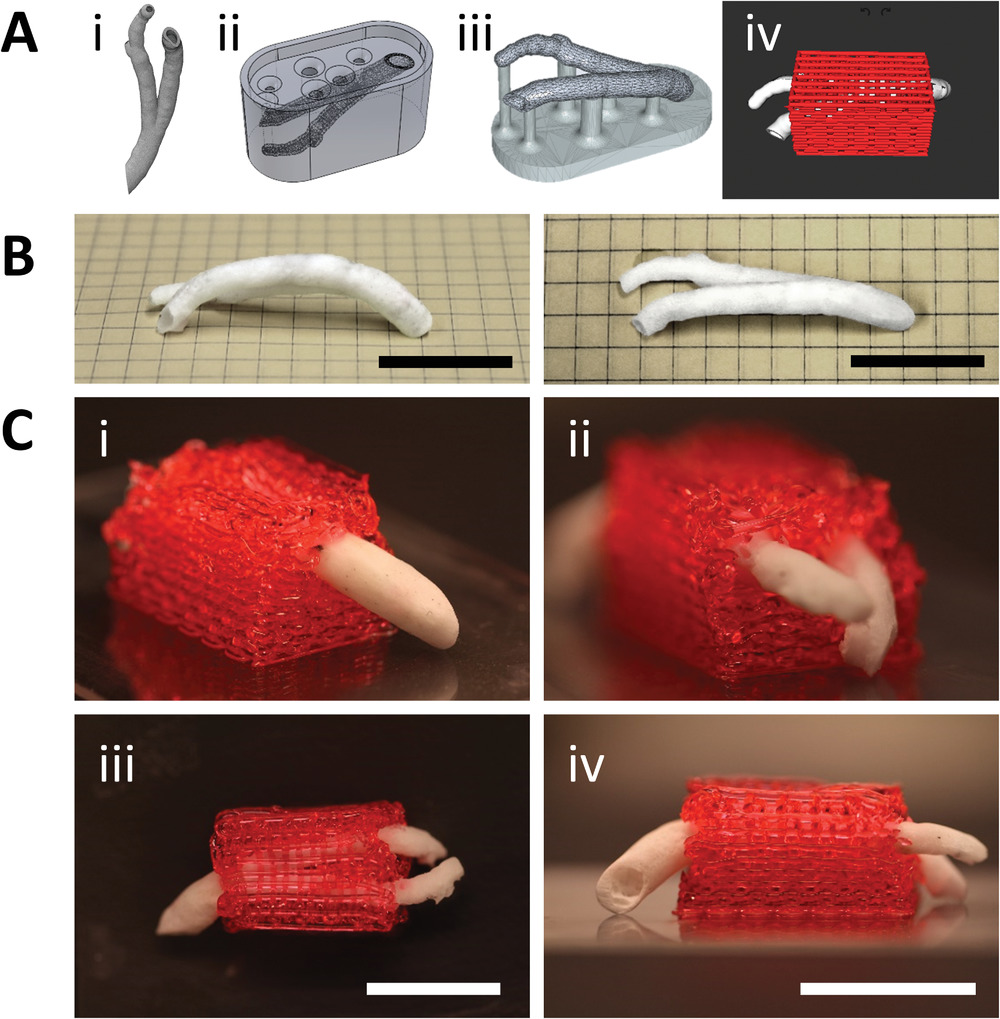 The preselections for the 2021 3D Printing Industry Awards are open to vote, give your opinion now.

A team of scientists from the Israel Institute of Technology (Technion) used 3D printing to form a network of blood vessels capable of delivering blood to implanted tissues.

Led by Technion Professor Shulamit Levenberg, the researchers 3D printed a tissue flap with a network of blood vessels that, apparently for the first time, contains a functional combination of large and small blood vessels.

The development could potentially eliminate the intermediate step of first transplanting tissue into a healthy limb of a patient to allow it to be permeated through the body’s blood vessels, before transplanting it into the affected area. 3D printing of blood vessels also allows for greater personalization for patients and could help reduce the risk of implant rejection.

The networks of blood vessels are vital for the transport of oxygen and nutrients to the tissues and organs of the body. Transplanted tissues need the same support of blood vessels in order to be accepted into the body and function successfully.

Supported by the European Research Council (ERC) under the EU’s Horizon 2020 research and innovation program, Dr Ariel Alejandro Szklanny from the Levenberg Stem Cell and Tissue Engineering Laboratory at the Technion sought to create a hierarchical network of blood vessels for transplanted tissues by taking advantage of 3D printing.

He started by 3D printing a polymer scaffold that mimicked the size and shape of a large blood vessel. The scaffold was printed as a hollow tube with side openings to allow attachment of small blood vessels. Unlike previous studies where animal collagen was used to form scaffolds, Szklanny used human collagen designed by Israeli bioprinting company Collplant which was derived from tobacco plants.

The structure was incubated for a week, during which time the large scaffold had created functional connections with the smaller bio-printed vessels in the surrounding tissues to mimic the hierarchical structure of a network of human blood vessels.

According to the Technion team, the study constitutes an “important step” towards personalized drugs and demonstrates the viability of 3D bioprinting. The technology makes it possible to 3D print large blood vessels of the exact size and shape desired and stitch them together with the tissue to be implanted.

Significantly, being able to implant tissue with its own network of blood vessels might eliminate the need to first implant tissue into a healthy part of the body so that it can be permeated by the body’s own blood vessels. , before transplanting it back into the affected area. . The fact that such tissue can be formed using a patient’s own cells could also greatly reduce, if not eliminate, the risk of the body rejecting the implant.

Going forward, the Technion team will continue to assess the scalability and translatability of their approach by adapting 3D-printed arrays of blood vessels for implantation in larger animals, such as pigs. The team believe their technique could open a new path to patient-specific tissue grown entirely in the lab and suitable for transplantation.

Further information on the study can be found in the document titled: “3D bioprinting of modified tissue flaps with hierarchical vessel arrays (VesselNet) for direct host-implant perfusion” published in the journal Advanced Materials. The study was co-authored by A. Szklanny, M. Machour, I. Redenski, V. Chochola, I. Goldfracht, B. Kaplan, M. Epshtein, H. Yameen, U. Merdler, A. Feinberg, D Seliktar, N. Korin, J. JaroÅ¡ and S. Levenberg.

Additive manufacturing techniques have been used to create structures that mimic blood vessels in the past as researchers seek to provide alternative methods for drug development, eliminating human and animal testing and disease treatments. .

In 2018, researchers at CU Boulder developed a 3D printing method that used controlled oxygen inhibition to mimic the structure and geometry of blood vessels. The aim of the study was to create microstructures that could be customized for disease modeling.

Around the same time, bioengineers at the University of California, San Diego developed a 3D bioprinting method to produce realistic organ tissue models containing arrays of blood vessels. The networks have been successful in keeping a cancerous tumor of the breast alive outside the body, as well as forming a model of the vascularized human intestine.

Subscribe to 3D Printing Industry Bulletin for the latest additive manufacturing news. You can also stay connected by following us on Twitter and love us on Facebook.