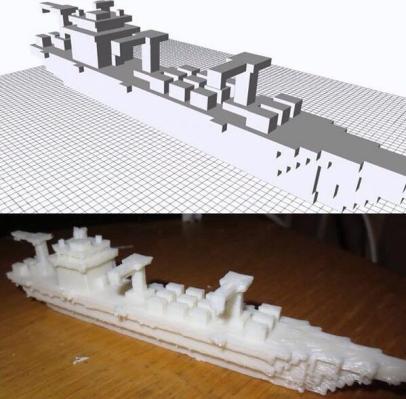 Tiles by Cadigo is a 3D modeling program for kids that lets toddlers drop blocks, walls, and pixels into an environment and then produce the object for 3D printing. Designed to be extremely simple, you basically create a shape in 2D and then extrude it in 3D, adding features as you build.

The software costs $25 for a first “Founders” edition with free updates, a larger canvas, and more block options. Cheaper versions reduce the size and shape of the objects you can create. The company is looking to raise $30,000 and will make the software available on PC, Mac, Linux, iOS, and Android if they meet their lofty goals.

To create objects, you simply place LEGO-style bricks in the virtual space. Once you’ve built your model, you can export to an STL file to print on a Makerbot or similar printer. Aimed at the very young, Tiles offers a number of building styles, including additive building by dropping blocks and “chip-way” which allows you to remove material from a larger block. Unlike tools like Printcraft, which translate game worlds into STL files, this is a true CAD tool, albeit with significantly reduced complexity.

Tiles was created by Cadigo, a marketplace for 3D models, and is the company’s first software offering. They also allow users to upload objects to their library so you can share your blocky creations with the world. Like TinkerCAD, Tiles allows extremely inexperienced people to try their hand at 3D modeling and, once they’re good at it, move on to more complex tools. If there’s one thing that holds the average 3D hobbyist back, it’s an understanding of 3D design and Tiles does its best to address that.