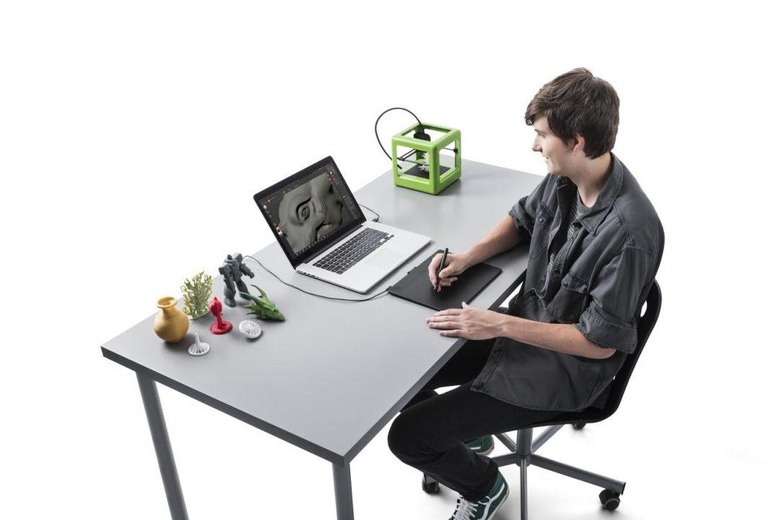 Joining yesterday’s reveal of the Slate and Folio smartpads, Wacom is back today, announcing something of a refresh to its Intuos line of pens and tablets. Hardware-wise, not much changes with the launch of the Intuos 3D, as users will still get a mid-size Intuos with a 6-inch by 8-inch active area. The real game-changer comes in the form of partnerships that transform the Intuos into a product designed to be an all-in-one solution for those looking to create and eventually publish or print 3D designs.

The most important team comes from Pixologic. One of the main differences between the Intuos 3D and previous versions of Intuos is that Pixologic’s ZBrushCore application is included as bundled software. Wacom and Pixologic claim that ZBrushCore is built on the same foundation as ZBrush, a pro-level application used by game designers, animators, and 3D modelers.

If you’ve never dabbled in 3D design but want to get started with the Intuos 3D, Wacom has you covered too, offering tutorials and online training that will introduce new users to the realm of 3D design via the Intuos 3D.

Wacom’s other partnerships come after designs are complete, partnering with both Sketchfab and Shapeways. If users want their designs to become a reality, they can send their designs to Shapeways for printing. For those who prefer to publish their creations on the web, they can take advantage of Sketchfab’s offerings. Wacom says special offers from both companies are included with the purchase of an Intuos 3D, but didn’t really elaborate on what those offers entail.

Wacom’s Intuos 3D will launch in late October at a retail price of $199.95. Wacom says the Intuos 3D will be available online through the company’s website and Amazon, or through a number of consumer electronics retailers around the world.